Wasps and other Galápagos Invaders: One Student’s View

As Laura Santoso, a student at the California Institute of Technology (Caltech), recently visited Santiago Island in the Galápagos, she said she was distracted from the natural wonders of the place by the wasps buzzing around her head.

“I was pretty shocked at the number I saw,” she told Galápagos Digital in a telephone inverview. Wasps are not native to Galápagos and a reminder of how the islands, even the uninhabited ones like Santiago, have been invaded by all manner of pests.

Writing in the Wired Science Blogs, Santoso noted: “The wasp incident was not an isolated episode. Even with my untrained eye, I saw the undeniable evidence of invasive species every single day I was in the Galápagos.”

People, in Santoso’s words, are the culprits: “Increased human travel to the Galápagos Islands since their discovery in the mid-1500s has introduced hundreds of alien species to the archipelago, both intentionally and accidentally,” Santoso wrote. “While many of these foreign species are harmless, some have spread throughout the islands like a disease, terrorizing native flora and fauna unprepared for the ecological onslaught.” 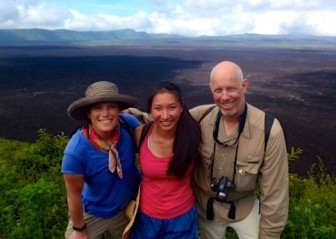 She noted that the task of eradicating these invaders is complicated.  “So complicated, in fact,” she wrote,  “that I became convinced we may never again see a day when some of the most iconic native Galápagos species thrive on their own.”

Santoso was part of a group of 16 that visited the Galápagos Islands in March on a 9-day tour organized by the university as a supplement to a course on evolution.  The group included two professors and a teaching assistant.

Santoso is about to graduate from Caltech with a degree in bioengineering and plans to attend medical school at the University of Massachusetts starting in the fall. She is a Massachusetts native.

Calling Galápagos “a special place,” Santoso said it’s important to preserve the islands as a living laboratory for scientists from around the world.

But she fears that the battle against invasive forms of life will be neverending.

“As long as humans live on the islands,” she wrote, “people will have to continually fight to reverse the damage caused by their own species in order to protect the beautiful endemic wildlife of the Galápagos.”