This year’s El Niño temperature pattern in the Pacific compared to 1997’s.

An El Niño occurs when surface waters in the tropical sections of the Pacific become warmer than normal.  Monitoring shows a strong temperature rise, similar to the one that occurred in 1997.  The giant El Niño that struck that year and lasted into 1998 disrupted weather patterns around the world, killing an estimated 2,100 people and causing $33 billion in property damage.

“There is a 90 percent chance of occurrence of El Niño, according to prediction models and forecasting,” said Eduardo Espinoza, technical director of ecosystems at the Galápagos National Park, quoted in a park news release.

The National Center for Climate Prediction, part of the U.S. National Oceanic and Atmospheric Administration (NOAA) puts the odds at greater than 90 percent with an 80% chance that it will last into the second quarter of 2016. 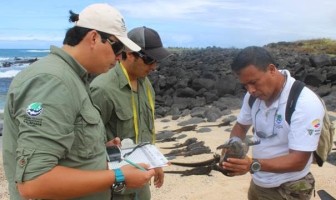 Espinoza is particularly concerned about the effect the weather changes will have on Galápagos marine iguanas that live on land but depend on algae in the ocean for their food supply.  “The marine iguanas feed primarily on green and red algae in the subtidal zone,” Espinoza said in an email to Galápagos Digital, “and these algae are the first that are affected by heating and persistence of warmer sea temperatures which lowers their abundance.”

El Niño can also be hard on the birds of Galápagos such as the blue-footed booby.  The changes in water temperature drive away the fish that the boobies eat, leaving the birds to starve. Experts say the boobies don’t reproduce under these conditions.

“Species that are on the border of survival or extinction might actually be tipped over the edge,” Dr. Stuart Banks, a marine scientist with the Charles Darwin Foundation, told Galápagos Digital last year. “We’ve already seen several possible extinctions.”

For tourists who plan to travel to Galápagos later this year and in early 2016, Espinoza has this advice:  “Bring light clothing, insect repellent and articles for rain.”  He added that in regards to the inhabitants of Galápagos, it is necessary to “promote an awareness of care to species that could be affected by El Niño.

Because South American fishermen originally observed the unusual weather pattern around Christmastime, El Niño gets its name from the Christ Child.

Some climatologists fear that global warming will lead to more frequent El Niño years, increasing the dangers to the wildlife of Galápagos.