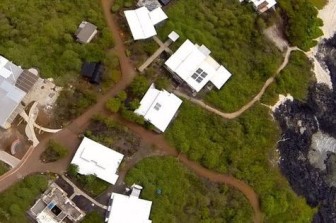 UPDATED TO INCLUDE COMMENT FROM THE MAYOR OF SANTA CRUZ

After threatening to cease operations in Galápagos, the Charles Darwin Foundation (CDF) has decided to stay open for business, at least for the time being.  Following a meeting of the foundation’s General Assembly in Quito, the Ecuadorian capital, the organization said in a news release that it and the government of Ecuador have formed a work group to figure out ways of keeping the CDF’s work in Galápagos properly financed.

“The Charles Darwin Research station has to remain open and in operation,” the release said.

Dr. Arturo Izurieta, director of the Galápagos National Park was quoted in the news release as fully backing the foundation:  “We need the Foundation,” Izurieta said. “We need the link to the scientific community that provides us with first class scientific advice.  We thank you for that.”

Left unresolved is the question of what happens to the foundation’s souvenir shop on Santa Cruz Island, a major source of revenue for the CDF.   In July, local authorities ordered the CDF to close the shop after local business owners complained about competing with the foundation.  CDF Executive director Swen Lorenz told Galápagos Digital: “By the end of the year, we will have lost approximately $200,000 in income.”

“The closure of the store basically ruined our 2014 budget,” CDF president Dennis Geist told the weekly journal Nature “We have no endowment. We don’t even have any reserve funds.” Geist is a volcanologist who has studied sites on the Galápagos Islands for three decades.

The closure has also made it difficult for the foundation to raise money from donors who would like to see the CDF become more self-supporting. “We have already lost a significant donation from someone who said that if the government of Ecuador doesn’t support us having a souvenir shop, then he won’t support us with a donation,” Lorenz told Nature. “We’re two and a half months late with salary, projects haven’t been running, and we’ve had one staff member leave.”

The threat to close the Darwin Research Station drew an angry reaction from the Mayor of Santa Cruz, Leopoldo Bucheli Mora. In an interview with the Ecuadorian daily El Universo, Bucheli called it “blackmail” and said that the CDF’s contract with the government of Ecuador does not include permission for commercial activity such as the sale of souvenirs in a store. “The main objective is to practice science, conservation and research but they do not have the authorization to engage in  this kind of business,” he added.

As for the contract between the CDF and the government–it has to be reviewed in 2016 and one result of the meeting with government officials is the appointment of a work group to discuss terms.

“This committee will then start a dialogue to strengthen the longer-term cooperation between the CDF and the government, and to strategically secure the operation of the research station,” the news release said.

As of right now, the meeting with government officials hasn’t changed the Foundation’s dire financial picture but a source close to the proceedings told Galápagos Digital that he hopes the government’s interest in keeping the CDF running will have a positive effect on future fundraising efforts.