What other Galápagos creature has his own line of clothing, his own postage stamp, at least two biographies and legions of devoted fans?  What made Lonesome George, the last of the Pinta Island tortoises, such an icon that his death a year ago was mourned worldwide?  Is he irreplaceable?

In life, Lonesome George became a dramatic symbol of what human carelessness can do to creatures living in the wild.  On Pinta, it was pirates, whalers and fishermen who exploited the tortoises, collecting them for food.  By the early part of the 20th century, the Pinta tortoise was considered extinct. Then in 1959 goats were introduced to the island and they devoured most of the vegetation there.

So, in 1971, scientists were amazed when Lonesome George was discovered on Pinta.  He was transplanted to the Darwin Station on Santa Cruz Island the next year.  Station personnel had hoped to breed him with female tortoises who had similar DNA, but George showed little interest in procreating.

So, when he died four decades later on June 24, 2012 without producing offspring,  the Pinta Island tortoises were all gone.

“Diego” the tortoise–at the Darwin Center 2013

Could there possibly be another tortoise that might take George’s place as the face of the Galápagos?  One possible candidate is Diego, who also resides at the Darwin Center which is now run by the Galápagos National Park. In the 1970’s, researchers discovered that on the island of Española, there were only a dozen tortoises remaining, ten females and two males.  They were all collected and placed into the breeding program there in hopes of preserving the population.

At the same time, one more Española tortoise was found at the San Diego Zoo, shipped back to Galápagos to join the others and named Diego for his previous place of residence.

Diego, unlike George, proved to be quite the stud.  So far, he has fathered 1,600 tortoises, assuring that they will not go extinct like their Pinta Island brethren. Guides at the Galápagos National Park now refer to him as “Super Diego.”

Then, there’s Pepe, the last domesticated tortoise in the Galápagos Islands.  In the 1920’s, when some people kept tortoises as pets and even ate them, Pepe was uprooted from his home on Isabela Island and transplanted to San Cristóbal.  In 1959, when the Galápagos National Park was formed, park officials took over the  domesticated tortoises. But Pepe, then residing with Franciscan missionaries, was permitted to stay under their care.

At one point, a wall collapsed on Pepe, severely damaging his shell.  Park officials debated whether to euthanize him, but they let him live and he recovered, much to the delight of visitors to the Franciscan mission.

Now, Pepe holds court at the San Cristóbal Interpretation Center museum, although the move may not be to his liking.  In the old days, the Franciscans would let visitors feed Pepe bananas and junk food and  he would scurry after them (at tortoise speed.)  As a result, Pepe wound up overweight and infected with intestinal parasites. These days, Pepe is fenced off from visitors with a “no feeding” rule in effect. When we saw him earlier this year, he was a lot less animated than he was at the mission.  (As a concession to the Franciscans, the museum has given the tortoise the official name of “Missionary Pepe.”)

But both Pepe and Diego lack something that has made Lonesome George immortal.  The poignancy and importance of his story–that he and his subspecies went extinct and that we humans were responsible.

His tale is told in the books Lonesome George, the Giant Tortoise by Francine Jacobs and Lonesome George: the Life and Loves of a Conservation Icon by Henry Nicholls.  In the latter book, Nicholls writes of George: “The voice he offers endangered species is loud and clear.” 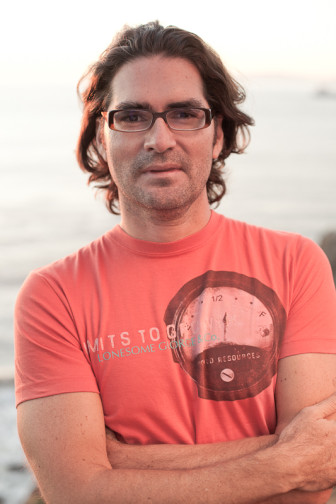 Lonesome George & Co. markets a line of clothing sporting George’s likeness as its logo.  Ten percent of the profits go into programs designed to build character and awareness of environmental concerns among young people in Galápagos.  Balerezo talks about training them to become “agents of change.”

“An Agent of Change,” Balerezo said, “listens to nature for inspiration and accepts the challenge of shaping the future.”

His face has been put on a special $25.00 stamp by the Ecuadorian Post office.  200,000 stamps have been printed, 150,000 of which will be sold in Galápagos with the remainder to be sold on the Ecuadorian mainland.

“I think it is a good idea so we will not forget him, we will have something that reminds us of him,” said Fausto Llerena, a Galápagos National Park ranger who rescued George from Pinta and cared for him for the rest of his life. “Beings die not when they stop existing but when we forget them.”

A possibility for replicating George’s subspecies may lie on Wolf Island, where a team of scientists from Yale University has found 17 tortoises that have partial Pinta genes.  They plan to return next year in hopes of collecting breeding stock that could be used to repopulate Pinta with tortoises genetically similar to the original ones.   They’ve also found tortoises with Floreana Island genes.  Floreana is another place where tortoises went extinct and where a breeding program might enable them to be reintroduced.

Dr. Linda Cayot, a herpetologist who serves as science advisor to the Galápagos Conservancy, told Galápagos Digital in an email that, on Wolf,  “We have a treasure trove of tortoises that can be used in conservation.”  Dr. Cayot wrote that’s because whalers, trying to lighten the load on their ships, anchored at Wolf and dumped the tortoises they had collected on other islands.

Meanwhile, Lonesome George’s body is being preserved by taxidermists in the USA so that he can become a permanent reminder of the importance of conservation.

Next winter, the American Museum of Natural History in New York will be George’s first stop before he is returned home to be put on exhibit at the Galápagos National Park headquarters on Santa Cruz.

Dr. Cayot says she believes this is a great idea.  “I think George can continue to work to save other tortoises in death,” she wrote, “Ending up as an eternal icon for conservation is a fit ending.”