That familiar smell of exhaust fumes from the plentiful water taxis that shuttle people around places like Puerto Ayora on Santa Cruz Island in the Galápagos could be lessened by new technology that the World Wildlife Fund and the Galapágos National Park have put on display.

It’s a solar-powered boat called “Solaris,” a pilot project intended to show how Galápagos could become less dependent on the fossil fuels that are used to transport tourists and residents of the archipelago.

According to the WWF, the boat, with eight solar panels installed on top of its canopy, can run for eight hours with a top speed of seven knots, sufficient for water taxi service.  Electricity produced by the panels is used to charge a set of lithium batteries so that the boat has a steady source of clean energy.

The vessel was confiscated from an illegal fishing operation and converted to electric power. Total cost, according to park spokesperson Leslie León Palacios was $35,000.

“This pilot project,” León said, “tries to show boat owners that it is possible to migrate to this sustainable model.”

According to a WWF story published on its website: “This is the latest innovation toward the goal of reducing the human footprint and promoting ecotourism in this delicate marine environment.”

Boats are the primary means of transportation in the Galápagos and environmentalists contend that their use poses a number of problems:  Gasoline and diesel have to be imported from the mainland at great cost with a constant danger of spillage of fuel and lubricants into the Galápagos waters. 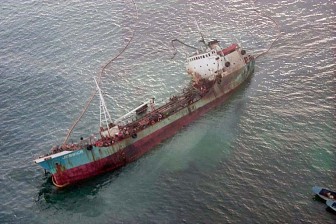 Longtime Galápagos residents vividly remember the oil tanker “Jessica” that ran aground January 16, 2001 off San Cristóbal Island, spilling almost 200,000 gallons of fuel and endangering marine and bird life with oil slicks that spread all the way to Tortuga Bay on Santa Cruz Island.

The hope of heading off future disasters like that one is a powerful reason for the park and the WWF to pursue projects like “Solaris.”