As Galápagos Digital reported in April, a pair of dogs are working for the Galápagos Biosecurity Agency, helping to protect the fragile ecosystems of Santa Cruz Island by sniffing out a major pest–invasive snails from Africa.  Now, in a follow-up visit, the American organization that placed the dogs in Galápagos has plenty of “attaboys” for the animals, named “Darwin” and “Neville.”

“We recently sent Texas-based trainer Tiffanie Turner back to Galápagos to check on the progress of both the dogs and their human counterparts,” Rebecca Ross, Executive Director of Dogs For Conservation, wrote on the Galápagos Conservancy website

“Tiffanie reported that Darwin and Neville have acclimated well to their new home and to their handlers,” Ross wrote.

The odyssey of the canine pair hasn’t been completely problem-free, however.  Ross reported that one of the dogs developed “a chronic allergy to a plant found in Galápagos,” although it didn’t prove to be serious.  Veterinarians at the Biosecurity Agency have dealt with the allergy, according to Ross. 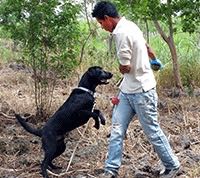 Neville and his handler on Santa Cruz Island

Both dogs and their trainers got a brush-up course from Turner.  “She put them through their paces with lots of training scenarios and real-world field trips to help refresh their memories and keep them motivated,” Ross wrote.  “The key to our training philosophy (both dogs and humans!) is to reward, reward, reward — so the dogs got their toys every time they did the correct behavior (find a snail), and the humans were rewarded with lots of verbal praise and the occasional piece of candy!”

Dogs For Conservation says it hopes that with the continued success of the snail eradication program, set-up with a grant from the Galápagos Conservancy, specially-trained dogs might be employed to detect other invaders that threaten the islands.