A curious resident of the Fausto Llerena Center peers into the Galápagos Conservancy’s Tortoise Cam.

A warning to all you cute little pandas posing for webcams at zoos and other locations in various corners of the globe:  there are some tortoises in Galápagos ready to share the spotlight.  Move over!

The tortoises are strutting their stuff  in front of  four Internet cameras set up at the Fausto Llerena Tortoise Center on Santa Cruz island, thanks to an international effort led by the Galápagos Conservancy, in cooperation with the Galápagos National Park.  Fans around the world can view them by clicking on this link.

“We need to keep Galápagos alive and real,” said Richard Knab, the Conservancy’s director of strategic projects, “and this is a great way of doing that.”

The idea was hatched at the urging of Dr. James Gallagher, a conservancy donor from New Jersey who was inspired by other nature cams on the Internet and put up an initial $20,000 to launch the project.

“I visited the Galápagos 10 years ago,” said Dr. Gallagher, “And I thought, we’ve got to share this with the rest of the world.”  He’s hoping that people who can’t get to the Galápagos in person can at least enjoy a video visit with the tortoises.

Feeding time in a screenshot from the Galápagos Tortoise Cam.

There were numerous technical hurdles to overcome.  Because Internet bandwidth is limited in Galápagos, the cameras can’t stream live video of the tortoises. Instead, the equipment stores recorded excerpts of the day’s activities and transmits them late at night when the Internet connection to the Galápagos National Park is idle.  The cameras are equipped with motion sensing capability so that they start recording automatically when the tortoises are on the move.

One irony is that given the limited Internet connectivity in the Galápagos, residents of the islands generally can’t see the video.  Of course, those who live on Santa Cruz can always walk over to the tortoise center and view the creatures for themselves.

Keeping the cameras maintained is another big concern because of heat, blowing dust and other environmental hazards.

“We’ve had a tough time finding a camera that can stand up to those conditions,” said Sean Burnett of Wildlife Intel, a Canadian company that was hired to provide the hardware, “We’ve had to ship a couple of replacement cameras down there.”

But the people behind the project say that in spite of the technological headaches, it’s all worth the effort.

“We want to open up the rest of the world to these magnificent creatures,” said Dr. James Gibbs, a conservation biologist at the State University of New York’s College of Environmental Science and Forestry in Syracuse, NY.

Dr. Gibbs, who helped set up the tortoise cam, has his students reviewing the video as it’s posted to the Internet.  And they’ve made an interesting discovery:  Some of the tortoises are camera hogs.

“The tortoises were fascinated with what looked like a giant eye,” Gibbs said, “They weren’t afraid of it.” 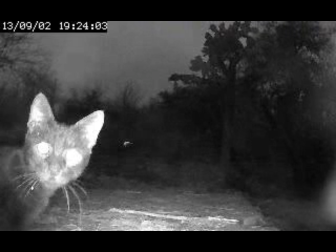 A stray cat checks out the Galápagos tortoise cam.

And it isn’t just tortoises that are fascinated by the cameras.  One clip shows a stray cat peering into the lens before wandering away, a reminder that introduced animals such as cats and dogs continue to be a problem on the Galápagos Islands.  Scientists and conservations have repeatedly warned that plants and animals brought in by humans represent the biggest threat to the islands’  ecosystems.

So far, tortoise cam has been widely lauded by people who’ve viewed it.  A sampling of digital comments left by visitors to the site:

Jim Gallagher believes that his investment in the tortoise cam has paid off beautifully.  “I could while away many hours watching it,” he said, adding the hope that others will do the same.

Now, the Galápagos Conservancy wants the word to go out that yes, indeed, the tortoises are ready for their close-up.  A note on the website says that because of bandwidth issues, “footage appears slow and choppy.”  But hey, we’re talking about tortoises here, not gazelles!