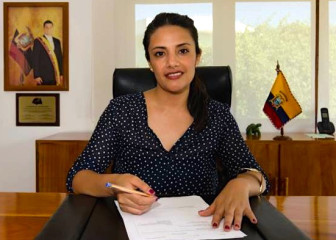 Ecuador Ministry of the Environment

The Ecuadorian Environment Ministry announced Friday (April 10) that Alejandra Ordoñez has been appointed the director of the Galápagos National Park.  She replaces Arturo Izurieta, who had held the post since September of 2013.

Ordonñez has a Master’s degree in public management, sustainability and competitiveness of tourism from the International University of Andalucia in Huelva, Spain.  She previously served as provincial director for the Ministry of Tourism and director of Public Use of the Galápagos National Park, focusing on improving conditions for tourists.

In the city of Cuenca on the mainland of Ecuador, she was coordinator of the Tourism Research Department of the Central University of Cuenca, and also served as a professor of masters in tourism and sustainable development.

Ordoñez becomes the second woman to assume the job of Park Director.