George is a lot less lonesome these days.  Betweeen now and January, the American Museum of Natural History in New York, an institution that boasts 5 million visitors a year, is playing host to the preserved body of Lonesome George, the last of the Pinta Island Galápagos tortoises.   Already, he’s getting boffo reviews in the Big Apple.

Posed dramatically, slightly reared back with his front legs and long neck extended, he’s being called an icon, an inspiration and an important part of the patrimony of Ecuador, where he will be returned following his New York run.

“He is motionless and yet he moves us,” said Arturo Izurieta, director of the Galápagos National park, his voice choked with emotion, as George was unveiled for the press in New York prior to his public debut.

George’s  death, June 24, 2012 at age one-hundred plus, marked the extinction of the Pinta Island species of Galápagos tortoises.  That ended a 40 year effort to try to breed George in hopes of bringing back the species.  But George was not a willing participant.

“Lonesome George was a difficult tortoise,” said Linda Cayot, a herpetologist who acts as science advisor to the Galápagos Conservancy and who worked with Lonesome George for a number of years.  “He didn’t like people and he didn’t like other tortoises.”   So he wasn’t about to fall for the younger females placed in his enclosure.   And then, he died with no survivors. 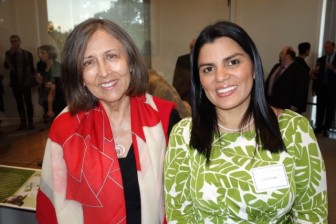 “Ecuador fought to preserve this species but time won the battle,” said Lorena Tapia, Ecuador’s Minister of the Environment.  “Lonesome George’s death has inspired us to strive for a better future for the planet and to correct mistakes humans caused over time.”

At the time of George’s death in 2012, Galapagos National Park officials as well as the museum and the Galápagos Conservancy began discussing what to do with his body.   Should he be buried on Santa Cruz with a fancy grave marker?  Should he be returned to Pinta Island?

Johanna Barry of the Galápagos Conservancy, who was in Santa Cruz at the time, remembers some pretty crazy ideas:

“He’s a rock star, send him on a world tour, somebody suggested,” said Barry, recalling that someone else floated the notion of barbecuing and eating Lonesome George.  After all, it was the human exploitation of tortoises for food that first pushed them to the brink of extinction.  Ultimately, the decision was made to preserve George as a mounted museum specimen.

After the Conservancy got two of its major donors to foot the bill, the frozen body of the tortoise was crated up and sent to New York to be worked on at the Wildlife Preservations taxidermy studio.

James Gibbs, of the State University of New York School of Environmental Science and Forestry, who became George’s escort for the trip, remembers an emotional pre-dawn departure from Santa Cruz:

“People would touch the box, they would cry.  They wanted to help every step of the way,” Gibbs said.  “I can only imagine what the response will be when he comes home.” 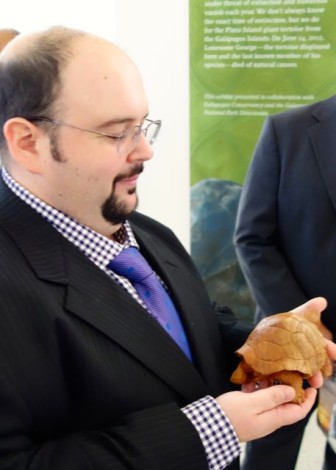 George Dante with the carved tortoise given him by Lonesome George’s keeper.

It took over a year to ready the body for public exhibit.  George Dante, the taxidermist who owns Wildlife Preservations, remembers when he was asked to work on George.

“It was a humbling moment,” Dante said, “A moment of disbelief, just slumping back in my office chair.”

Dante said he wanted to make sure that George was presented in as lifelike a manner as possible. “It was challenging,” Dante said,  “And it weighed heavily on my mind.”

As he sought opinions about how to pose the body, Dante said George’s keeper of 40 years, Fausto Llerena, provided some of the best insights.  Later, Dante said he was deeply moved when Llerena sent him a token of  appreciation–a wooden tortoise that Llerena had carved.

“This is my Oscar,” Dante said.

Closeup of Lonesome George with the greenish stains near his mouth

The VIP’s who attended the unveiling lavished high praise on Dante, noting that he got the little details, like the greenish stains near George’s mouth from eating fresh vegetation, just right.

Plans call for the preserved tortoise to be returned to Quito in January. Lonesome George needs to be kept in an environment where temperature, humidity and light can be carefully controlled.  Why Quito? Galápagos does not yet have an appropriate facility, park director Izurietta said.

The mayor of Santa Cruz was unhappy, calling the decision “outrageous.”   Quoted in the Ecuadorian newspaper El Universo, Mayor Leopoldo Bucheli said, “George is an icon and should return to Galápagos.  We will urge the ministry of the Environment to change its mind about this.”

Meanwhile, Cayot said that work continues on finding live replacement tortoises for Pinta Island.  There’s some excitement about the discovery of hybrid tortoises on Isabela that may share some DNA with the extinct Pinta species.   They could form the breeding stock for a future Pinta population.

“We need to do the work before there’s only one left,” Cayot said.

Gibbs said regardless of George’s final destination, he has an important conservation message for the world, quoting from a plaque that once marked George’s enclosure on Santa Cruz:

“Whatever happens to this animal, let him always remind us that the fate of all living things is in human hands.”

Related: The Legacy of Lonesome George–Rescuing other Tortoises from Extinction.