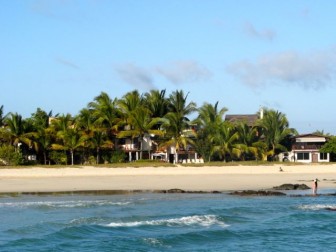 Muggings of tourists rarely occur on the “enchanted islands” of the Galápagos, but something unprecedented happened in the early hours of Sunday, June 9: A Japanese tourist, whose name has not been released, was the victim of a violent attack in Puerto Villamil, Isabela Island.

“She left the Hotel Tero Real approximately 5:15 am and was headed to the pier when she was attacked by a guy on a bike,” Police Commander Edgar Lopez told Galápagos Digital. “He hit her in the face with a rock,” adding that “Fortunately the attack was interrupted by a couple on a motorcycle who approached.”

Lopez said the suspect fled into the mangroves and disappeared, leaving behind his bike and his shoes.

A short time later, Commander Lopez said, a police patrol arrived at the scene giving the victim first aid and transporting her to the hospital. Given the seriousness of the injuries to her facial bones, she was later transferred by helicopter to Baltra, accompanied by a doctor, where she was put on a plane that for the mainland and treatment at the Clinica Kennedy in Guayaquil.

“The tourism industry and the citizenry are convulsed, worried, distressed and embarrassed by this,” said  Gino Salazar, owner of the Hotel Selva Negra in Puerto Villamil, “this is an island of peace and it is tragic to think that may cease to be.”

Local authorities have been assisted by elements of provincial and mainland police in conducting a thorough investigation. According to Commander Lopez, police have sent photos of two possible suspects to Guayaquil so the Japanese tourist can try to identify her assailant.

On Tuesday, June 11, the Security Council of the Municipality of Isabela  submitted a list of 14 recommendations for the safety of the island ranging from escorting tourists from the hotels to the pier, to offering a reward for identifying the culprit, to sending a letter of apology to the Ambassador of Japan.

Also on, Wednesday June 12, authorities have called a citizens’ meeting with judicial, police, municipal and provincial officials, including Governor Jose Torres, to share information and explore ways to prevent further occurrences of these types of crimes.