At four in the morning of June 27, while most Galapagueños slept, a team of rangers and scientists of the Galápagos National Park loaded 201 young tortoises on the vessel Sierra Negra in Puerto Ayora on Santa Cruz Island and sailed on a historic journey. It took an hour and a half to get to the island of Santa Fé and what made the crossing significant is that it marked the first time tortoises have inhabited the island in 150 years.

“More than twenty-five park rangers transported the tortoises from the coast to the central zone of the island where they were released, approximately three kilometers from the coast,” said Danny Rueda, Director of Ecosystems of the Galápagos National Park.

This operation is part of an ambitious and creative effort by the Galápagos National Park, in collaboration with the organization Galápagos Conservancy to restore tortoise populations on islands where the iconic creatures have become extinct.

One of these islands is Santa Fé, also known as Barrington, a small island of just 24 square kilometers (9.3 square miles) of surface located in the center of the archipelago. In the eighteenth and nineteenth centuries, buccaneers and whalers, seeking food for their long voyages, decimated the population of giant tortoises on Santa Fe and other islands.

Later, when fishermen introduced goats to the islands, the goats ate away the vegetation that sustained the surviving tortoises—the final blow leading to their extinction.

Current genetic analysis of bone fragments suggest that the Santa Fe tortoises, Chelonoidis sp, may be similar to those of Española  Island, Chelonoidis hoodensis.  That’s why the 201 Española tortoises are substituting for the original population.  The scientific name Chelonoidis hoodensis comes from the name “Hood” given to the island on old English navigational charts.

“The use of an analog species (the Española tortoise) that can replace the original extinct species (the Santa Fe tortoise) is a new approach for ecosystem restoration in Galapagos and can provide a model for the world,” said Dr. Linda Cayot, Science Advisor for Galapagos Conservancy.

The tortoises are between 4 and 10 years old and were bred in captivity at the Fausto Llerena breeding center on Santa Cruz Island.

In 1971 the Galapágos National Park eradicated goats and vegetation returned, helped by heavy rains during years when the El Niño phenomenon was active in the Pacific Ocean.  Currently there are 250,000 Santa Fe Opuntia cactus, mostly adults; and 6,500 land iguanas (Conolophus pallidus).

In a news release the Galápagos Conservancy said the purpose of the project is to establish “a reproductive tortoise population to fill the historical role of ecosystem engineer on Santa Fé.” To keep track of the tortoises, 30 of them were fitted with radio telemetry transmitters so their positions on the island can be tracked. 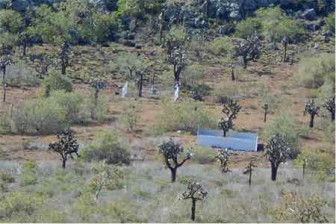 Fenced-off areas were created on Santa Fé Island in 2014 where tortoises and iguanas won’t be able to feed on the vegetation.

Preparations for this reintroduction took several years. In 2014, a team from the Park staff and Galapagos Conservancy traveled to Santa Fe and fenced off areas where the tortoises and iguanas will not be able to consume the vegetation.  That way, scientists can compare the impact of native herbivores on the ecosystem in areas where they can and can’t feed on the local plants.

An important part of the Project, added Rueda, is the evaluation over time of ecosystem changes due to the presence of the tortoises, as well as the interaction between tortoises and land iguanas, especially for shared resources such as food.