There are more than eighty feathery lumps laid out on a cloth–the bodies of yellow warblers killed in just one day by vehicles on the Santa Cruz Highway connecting the Baltra ferry landing to the city of Puerto Ayora on Santa Cruz Island. Galápagos roadkill.

“This has been going on for a long time,” said Godfrey Merlen, a British biologist who’s lived in Galápagos for four decades. He and an assistant recently spent a day hiking and bicycling along the road, collecting the dead birds.

The Galápagos National Park estimates that 50-60 birds are killed in an average day, a number that would add up to between 18,000 and 22,000 dead birds in the course of a year.  Park officials say the problem is caused mainly by taxis speeding along the road, trying to cram in as many lucrative runs to the ferry dock as possible.  They say the speed limit, 70 kilometers per hour (43 MPH), is widely ignored.

It’s ironic that Galápagos wildlife, the very magnet that brings the tourists, is being slaughtered by the taxi drivers who depend on the tourist dollars for their livelihood.

The organization WildAid and the park have equipped the Santa Cruz police with radar guns to catch speeders but, according to park officials, the police have been reluctant to use the equipment, citing personnel cutbacks and malfunctions of the radar guns as excuses. 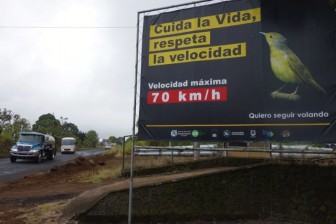 Now, the park has launched a public awareness program, using billboards along the road and a weekly radio broadcast to try to reduce the carnage, urging taxi drivers to slow down and drive within the speed limit.

“I try to observe the speed limit,” said one Puerto Ayora taxi driver, “but sometimes the birds just fly out of nowhere and hit the vehicle. I am no saint but I am more careful than other drivers who come from the mainland and don’t know about our environment.”

“There is a lack of will,” said Luis “Lucho” Moreno, the owner of a Puerto Ayora pharmacy, “The National Park must pressure the police to act.” Moreno, who began noticing the bodies of yellow warblers six years ago when he was riding his motorbike on the highway, was first to raise alarms about the dead birds, peppering public officials with complaints.

“We are all guilty,” he said, “not just the drivers, all of us, because we do not value what we have in Galápagos–beautiful nature.”

The front of Luis Moreno’s pharmacy in Puerto Ayora

Moreno commissioned the painting of a mural on the front of his drugstore featuring birds and the slogan “keep me flying” written in English. Moreno says he would like all the Galápagos authorities and even President Rafael Correa to join him in the effort to save the birds.

A friend of his, Galápagos park guide Marlon Véliz, has written a poignant children’s story about the plight of the birds, called “The Monsters of the Highway.”

In it, a little bird named Miguelito wonders what has become of his mother:

“My mommy went to look for food but now I don’t see her coming home.  My little brothers and sisters are crying and I can’t help them because I don’t know how to fly.

“Monster of the highway, I ask just one thing and nothing more. If you see my mother, who is yellow like the sun and is very beautiful, more beautiful when you hear her sing…if she comes your way, please don’t kill her. Just tell her you’re passing by, that my little brothers and sisters are crying a lot, that we’re hungry and we just want to hug her.”

But, in the end, it’s up to the adults to protect the yellow warblers and the other birds of Galápagos. Godfrey Merlen would like the Ministry of Tourism to take up the campaign:

“It is out of context to promote tourism and at the same time kill the resource that  encourages tourism,” he said, adding that everyone who lives in Galápagos lives through the natural resources and that maintaining those resources should be given top priority.

“Killing birds on the road,” he said, “is disrespectful of these aims and assuredly unnecessary.”

In the meantime, visitors to Galápagos can do their part.  If you’re riding in one of the taxis that uses the Santa Cruz Highway and you see your driver going faster than the 70 kph speed limit, you can say:  “más despacio, por favor“–“Slower, please,” and “Cuidado con los pajaritos”–“Be careful with the little birds.”