Celebrating Darwin and the Darwin Research Station in Galápagos

Exactly 158 years ago, on May 14, 1856, Charles Darwin began writing an extended treatise that would later become On the Origin of Species, his landmark work that laid out his theory of evolution by natural selection. That theory, inspired by his voyage to the Galápagos Islands and his observation of how creatures on the islands adapted to their surroundings, made him one of the most influential scientists in human history.

“Darwin was way ahead of his time,” said Dr. Frank Sulloway, a University of California, Berkeley professor who holds a PhD in the history of science.  According to Sulloway, Darwin gave an advance warning of present-day environmental woes, writing about “ecological cascades,” events, often triggered by humans, that could wipe out fragile ecosystems in places like the Galápagos.  Scientists, Sulloway said, have seen that borne out repeatedly in recent years. 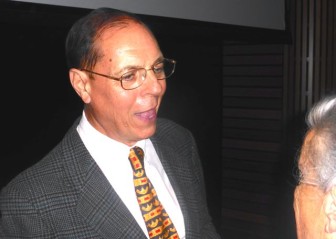 Sulloway noted that in addition to killing off wildlife like the hawks, man has introduced unwanted plants and animals to the islands. “Galapagos is overrun with all sorts of things we don’t want there, ” he said.

Speaking at a Monday event in Berkeley to mark the 50th anniversary of the dedication of the Charles Darwin Research Station, Sulloway said that Darwin once wrote: “The Galápagos seems a perennial source of new things.”  Sulloway said that Darwin would be fascinated by all the discoveries made in recent times by scientists using modern research tools that didn’t exist in the 19th century.

The Charles Darwin Foundation is planning a series of events this year to commemorate the golden anniversary of the station, started in partnership with the Ecuadorian government to foster scientific research and educational projects aimed at conserving the flora and fauna of the Galápagos Islands.  There’s more information on the Foundation’s website

Swen Lorenz, the Executive Director of the Darwin Foundation spoke about efforts underway to improve the Darwin Center’s outreach to the public, including improvements to the interpretation center and library on Santa Cruz Island.

As the Foundation was marking the anniversary, authorities in Galápagos were still trying to figure out how to refloat the grounded cargo ship Galapaface I that has been stranded on the rocks off San Cristóbal Island since May 9.  Officials in Galápagos say that 19,000 gallons of fuel aboard the ship have been pumped off, avoiding an environmental disaster,  but that tons of cargo remain onboard.  They say efforts to remove the cargo are hampered by the fact that the ship is listing badly. The authorities have declared a provincial emergency as two tugboats and a crane are arriving from the Ecuadorian mainland.  Additional personnel are en route from other islands.

Sea lions Ignore the grounded cargo ship in the background.

Some Galapagueños have used social media to urge the enactment of more strict rules for cargo ships that call on the islands, including the use of pilots and tugboat escorts for vessels approaching Galápagos harbors.

Galápagos is indeed overrun with all sorts of things we don’t want there.