Cecilia Alvear: Are We Loving Galápagos to Death? 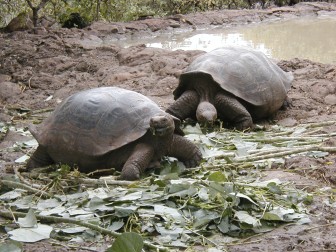 This was a piece I wrote for Harvard’s ReVista in 2009 and it still holds true today.

Whenever I tell people that I was born in the Galápagos Islands of Ecuador, they always say, “I didn’t know there were any people on the Galápagos. I thought only strange animals lived there.” To which I usually respond that people—strange and not-so—also made their way to the islands over the years.

The islands were unpopulated for centuries, although they were not unknown. There are oral accounts of one Inca ruler who made his way here on a raft. The first written chronicle comes to us from the Bishop of Panamá, whose ship was blown off course in 1535. The misplaced cleric and his party loaded up on water, but the volcanic terrain and the strange creatures reminded them of hell, so he said mass on the beach and promptly left. The islands, also known as “Las Encantadas” or “The Enchanted Isles,” later became the refuge of pirates and buccaneers. In the 18th and 19th centuries, whalers made the Galápagos a way station to stock up on water and giant tortoises which they carried as a meat supply.

In 1832, the newly independent government of Ecuador took possession of the Archipelago and in 1835, a young Englishman by the name of Charles Darwin came calling.

And the rest is history—or evolution, if you prefer.

Throughout the early years, Ecuador tried all sorts of colonization schemes. When they failed, settlers left behind domestic animals which became feral and to this day threaten the native species.

Among the more colorful human specimens in the Galápagos saga stands the legendary tyrant Manuel Cobos who planted sugar cane and ran a sugar mill and a railroad in San Cristóbal Island with convict labor. He was killed during an uprising. A few years later Norwegian immigrants tried to start a fish processing plant. It failed for lack of adequate transportation. In the 1920s, several Europeans arrived searching for a Robison Crusoe experience in this volcanic utopia.

In the 1930s came a woman who called herself a Baroness and lived with two lovers in Floreana Island where she intended to open a hotel. She and her favorite suitor vanished mysteriously—but that is another story. Several Germans who came in those years fleeing the impending horrors. Prominent among them were the Wittmers and the Angermeyers whose descendants still live on the islands. Mrs. Margret Wittmer wrote Post Office Floreana about her experiences. A couple of “pre-hippies,” Ainslie and Francis Conway, arrived from Berkeley, California. She wrote a book about their adventures, Las Encantadas.

Both authors praise my father, Lt. Col. Alejandro Alvear, who was appointed “Jefe Territorial” or Military Governor of the Archipelago in 1939. They call him “enlightened” because he built the first school in San Cristóbal and cared about the settlers.   When my father, my mother, Laura Triviño de Alvear, and my older sister Alexandra arrived in 1939,  Baquerizo Moreno in San Cristóbal Island was  a small village with huts of bamboo, lumber and corrugated iron. There were only 800 people living in the whole Archipelago. My parents lived in a wooden house facing “Shipwreck Bay” (with a front porch view of the site where on January 16, 2001, an old tanker, the  “Jessica” ran aground, spilling bunker fuel ). That’s where I was born and where I spent the first two years of my life.

Although I was never more than a toddler there, I know that we spent most of the days at the then-pristine beach. Sealions and iguanas frolicked on the nearby rocks. We watched the blue-footed boobies as they dove in swarms to catch fish for their dinner.

In the summer of 1996 I returned to Galápagos with a group of friends. As we approached San Cristóbal a school of dolphins rode the bow wave. They are magnificent creatures in their natural habitat: powerful and playful, enjoying an afternoon romp in the turquoise waters. Our squeals of delight seemed to encourage them to do even more elaborate somersaults, to flip over and then to look up at us to check our reactions. I felt they were welcoming me back home.

The Galápagos were declared a national park in 1959, and in the 1960s tourism to the islands started to grow and produce significant revenues for Ecuador. There are now about 160,000 annual visitors—including myself— and the local population, mainlanders in search of better job opportunities, now numbers 30,000 spread over five populated islands. My birthplace, Baquerizo Moreno, is now a small city of 4,000, with a concrete pier, paved streets, cars, and cement houses. The house where I was born was swallowed by the new Ecuadorian Navy base.

Although the Galápagos National Park and the Darwin Foundation are making efforts to protect the fragile environment from the impact of the human species, it is very hard for us to co-exist with endangered species. One famous story is that of “Lonesome George,” the last one of the species of tortoises that inhabited Pinta Island. George now lives in Santa Cruz island where the Darwin Foundation cares for him.  Efforts to find him a suitable mate have failed thus fair, but there may be some hope because recently another male tortoise was found with half of the genes of George so now the search is on for a female equivalent to try and save George’s species.

Some of the people who live in the Galápagos are fishermen. It has been difficult for them to accept governmental regulations as to the length of time they can fish and amount of crustaceans and fish they can harvest. In the past they have  staged uprisings to protest the end of the lobster season and the constraints on the harvesting of sea cucumbers.
Tourists come here because they love the animals and the wildness of the several islands that are still uninhabited. Islanders resent what they perceive as a policy that favors animals over people. They also feel that the profits generated by the tourism industry tend to favor well-established mainland operated tour companies.  Tourism is the economic lifeline for the islands but  it has many downsides.

The islands were given World Heritage site status by Unesco in 1978 and in 1985 were declared a Biosphere Reserve. This was extended in 2001 to include the 43,500 square miles  of ocean surrounding the islands.But in 2007 UNESCO  joined the government of Ecuador in declaring  the islands “at risk.” But despite all these efforts the flood of tourism continues and will be even greater this year which marks the 200th aniversary of Darwin’s birthday and the 150th anniversary of the publication of his theory of evolution inspired by his visit to the archipelago.   Perhaps the time has come to seriously question whether we are loving the Galápagos to death.