Billionaire Jeffrey P. Bezos, 49, the founder of Amazon.com is reported resting comfortably back in the United States after he was evacuated from Galápagos and treated for a painful attack of kidney stones.

The Ecuadorian Navy reported in a press release that Bezos was picked up at 3 PM New Year’s day by a Bell 430 rescue helicopter at Academy Bay in Santa Cruz island and flown to neighboring Baltra Island.

There, according to Ecuadorian Naval Captain Daniel Gínez Villacís, Bezos had a private jet waiting to take him back to the U.S. for treatment. The navy said he had been vacationing aboard a cruise ship when he was stricken. 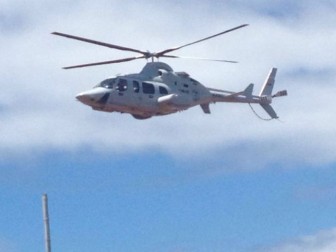 According to the Navy press release, the members of the helicopter crew were personally thanked by  the Bezos family and by his business associates.

“He got a good outcome,” said Amazon spokesman Drew Herdener in an email.  “No surgery was required, and he’s feeling well.”

Bezos, whose net worth was reported last year by Forbes Magazine at almost $28 billion , acquired the Washington Post newspaper in October for $250 million. He founded Amazon.com in 1994.