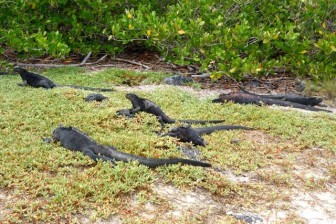 The Ministry of Environment through the Directorate of the Galapagos National Park ( GNP ) and the Agency for Regulation and Control of Biosecurity and Quarantine for Galapagos (ABG) has announced that rangers and scientists are studying the causes of death of 14 marine iguanas in the area of Tortuga Bay on Santa Cruz Island.

They were alerted to the problem by a hunter who noticed the presence of the dead iguanas near the Las Palmas break, a popular surfing spot.  Rangers were called to the scene and observed the reptiles in an advanced state of decomposition, the ministry said.

Officials are said to be intensively monitoring the population of iguanas and environmental conditions of the site.

On September 9, a day after the initial discovery, officials said they detected the first case of a dead iguana on the Tortuga Bay beach proper.  They also observed another iguana that appeared to be ill.  National Park experts and the ABG representatives have not determined a direct connection to the earlier deaths.

As a precautionary step, the Galapagos National Park said it closed access to the colony of iguanas in Tortuga Bay and began studying the health of the 775 living iguanas in this sector.

Veterinarians and biologists from the ABG and the GNP performed autopsies of the dead iguanas whose bodies were in good condition.  Some showed bellies full of green and red algae as well as inflammation and bleeding in their small intestines.

Washington Tapia , head of research of the GNP , said the autopsies indicate a digestive problem although the exact cause of death isn’t known. The preliminary analysis rules out the possibility of chemical or fuel contamination at the site. The clues point toward some sort of natural cause, according to the National Park.

Studies continue with the support of scientists from partner institutions , specialists in marine iguanas and reptile diseases who hope to implement remedial actions .